As the music itself suggests, “Hot Type” was inspired by the sound of a typewriter and was originally titled “IBM Selectric II Correctable Typewriter”, however, IBM’s lawyers wouldn’t allow Michael to use the name. So he sarcastically changed it to “Mood Music for Corporate Lawyers” and eventually settled on it’s final title. In the old days of printing, all type was cast into metal, called “hot type”, similar to the hammers on a typewriter.

The original titles for the opening suite from Taproot were “Angels & Witches” (“The First Cutting”), “Jealousy” (“The Jealous Tunnel”), and “Triumphant Irish Marsh” (“About Face”).

“Aura Müünta” from Oracle originally appeared in a different arrangement as “Kimberly” on the Princess Scargo & the Birthday Pumpkin soundtrack.

Get the meaning behind Michael’s symbol.

The original title for “A Midwinter’s Night Dream” from The Road to Return was “City Scenes”.

“Eleven Small Roaches” from Breakfast in the Field was rerecorded as “Eleven Small Cubs” on the Santabear’s First Christmas soundtrack.

What do YOU do when you listen to music?

I think.
I drive.
I make love.
I dance.
I groove with my head and snap my fingers.
I eat.
I wonder.

If you do these things, Don’s guitar record should be fine. He’s not trying to tell you in the music that he’s fast or that he’s got great phrasing or that his sense of rhythm is flawless. He just wants to tell you what he felt when he was thinking, driving, making love, dancing, grooving, eating and wondering. I play the guitar because it lets me dream out loud. Don’s record is like a good dream. I can’t tell you what the dream is about, but I can feel it. Thanks for the music, Don.

The original title for Oracle was Copperhead.

The original title for the song “Oracle” was “Fusion of the Five Elements”, relating to the five energetic elements studied as part of Chi Kung. Michael talks a bit about this in the 4/14/94 interview.

The tune “Rikki’s Shuffle” was originally recorded as a duet with Michael Manring on Manring’s first solo album, Unusual Weather, under the title “Manthing”.

The license plate on Michael’s maroon BMW read “TAPROOT”. What a ham!

Michael’s studio, the Speech & Hearing Clinic, is named as a dedication to his father who was a speech therapist and whose clinic had the same name.

Michael once performed “Aerial Boundaries” while suspended 20 feet over the stage as accompaniment to a performance by the Iso dance company. 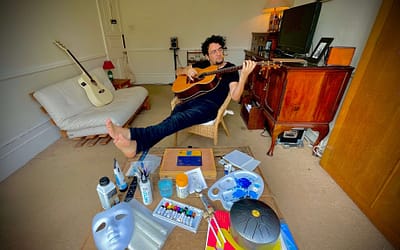