In 1985, at the age of ten, I had recently moved from London to a remote village in the Andalusian mountains of Spain with my mother. This dramatic move came after several years travelling around Europe with her in a VW Camper van, as she gigged from club to club performing her cabaret show. I was already used to the musician-come-gypsy lifestyle, as she would park up the van in camping sites and disused car parks all over France and Northern Spain, and I would watch her and her partner/guitarist performing every night. By the time we settled to live in Spain, music had already gripped all of my childhood attention and became the only connection I had to my life in England. My older brother would visit us and bring me mix tapes of the music he was listening to at the time. Every visit he made meant new music for me. Music that would become the lifeline to my hope of returning to England again, and one day becoming a musician.

By ’86, I had already worked out how to multitrack my own recordings by using an old Panasonic dual cassette deck that my mother donated to me after she’d upgraded to a better sound system for her own gigs. It was that Summer that my brother gave me a cassette that would become the soundtrack of my life in Spain until I returned to England some years later. Side A was Michael Hedges’ Aerial Boundaries and Side B was his first vocal album Watching my Life Go By. I’d already been listening to a lot of Mike Oldfield, so diverse guitar sounds were already a daily staple of my musical diet. But Michael’s music propelled me into a world of sound and songwriting that soothed some of what was an adventurous, but difficult childhood. I simply wanted to go home, but understood that my mother’s dream and happiness was to stay in Spain.

I had enrolled in the Order of Bards, Ovates and Druids—a druid order in England who sent me literature each month. This connected me back to the island I wanted to return to. I would devour the magical texts and even perform rituals alone in the large converted doghouse that became the annexe where I lived. Separate from the main house underneath the bushes of Spanish Jasmine, I learnt everything I know about music. I would often play the opening track of Aerial Boundaries, light incense and meditate on an intention that the universe would find a way to bring me back to England.

The harmonic tapping fingerstyle droplets of mesmeric notes felt like the swirling stars moving around the earth, as I would cleanse the crystal my brother had given me and set my intention. Once through fire, once through water, once under earth on a full moon and back to air to breathe in the world again. I prayed that soon I would be back living in England and pursuing a life in music.

By age 13, I had begun home schooling (my own choice), declaring to my mother that the Spanish school I had attended for three years was not going to provide me with the qualifications I would need when I eventually returned to England. Family friends in England sent me all the books I needed to teach myself. I set my own curriculum and followed the English timetable five days a week in my little room. Whilst my mother gave me the precious gift of time by myself to create, she’d unknowingly turned me into a culture vulture whose thirst for knowledge and experience would never be quenched on The Costa Del Sol.

Eventually, she realized that I was not going to change my somewhat stubborn and tenacious obsession about returning to England. All I talked about was English history, paganism, Glastonbury, The Holy Grail, Stonehenge, Greenpeace and all the other things that the beautiful but remote area of Spain we lived in could not provide at that time.

My older brother gently persuaded my mother to let me return to England when I was 14.

I returned as a ‘boarder’ at a Rudolf Steiner School, the reduced school fees for which she paid by singing in the nightclubs of southern Spain. It was hard for both of us, but our separation supported both our dreams.

Somehow, in the excitement of my intention finally being realized, my Michael Hedges cassette was nudged to the side as I discovered The Beatles, Hendrix, Kate Bush, Peter Gabriel and The Pixies. Until this year.

In the year the pandemic began, I was once again drawn to ritual, a deeper longing for the natural wonders of the earth, and something that is often referred to as ‘Chaos Magic’. The lockdowns have been tough on musicians and I soon realised that without the gift of travel and the freedom of movement, a journey inward might be the next best thing. Time travel became an important part of the journey, and I began to revisit the 13-year-old child that had cast spells alone in his room to the sounds of Michael Hedges. So I went hunting for him. I wanted to bathe in that sound again. I listened to the records and the pure innocence, hope and belief of a better future all came flooding back to me. I was excited. And I wanted to connect. I am a serial letter writer and have been ever since I lived in Spain.

Maybe I could write to Michael? I wonder what records has he made since? Maybe he’s still doing concerts? You see, when I listened to Hedges, I never even knew what he looked like. I just had his music. Without the internet or even television for most of my childhood, the music was all that was real to me. In those days, an experience of art was enough. I don’t remember ever feeling the need to find out about the life behind the music. The man behind it was a mystery. A mystery I had never felt the need to unravel until 30 years later.

YouTube was my first visit, and for the first time, I watched him performing.

My first thought was “That’s how those sounds were made!?”. I couldn’t believe it. With most artists that I have studied and listened to throughout my career, it was always easy to spot where the human ended and the music began.

Not with Hedges. There seemed to be no separation between his humanity and his music. In this realisation, I was struck with the single fact that there was still another level in my relationship to music that I could aspire to. My relationship with music is deep, but watching Michael perform in video after video made me realise, you can go deeper.

I immediately felt like reaching out to him to say how important his music had been to me as a child. A quick search that led me to Wikipedia told me that would not be possible. At least not in this realm. I learnt that he died in 1997. The year I released my first album. As I read the words, I felt the loss. As I read every article I could find, eulogy after eulogy, I could not believe that during the time I was performing my first shows in my early twenties, I could have seen him live, I could have picked up from where I left off. I yearned to make the connection to the soul that had made the music that adorned my childhood dreams, and helped me to achieve them.

So, in honour and tribute to Michael Hedges, I decided to learn (as best I could), some of his techniques for a new collection of songs that I had been working on. That would be the closest I could get to the life force that flowed through him.

I’m not the most proficient guitarist. I broke one of my fingers in 2013 and have never been able to play with precise fluidity since. But I am thorough in my compositions, so the songs are very much manifestations of the whole picture of the song and their compositional intentions, rather than the virtuoso detailed perfection that all of Michael’s work displays. I chose nine of his songs and used the innovative guitar tunings of each song to construct my own song. After receiving Rhythm, Sonority, Silence from John Stropes, I produced the album in my home studio in the first three weeks of 2021, whilst painting the album cover between takes of each song. It was the first album I’ve made for many years where I wasn’t thinking about what other people might think. Where usually I have an audience in my mind when I make an album, I just had the music and me. I already have my next album waiting to be released, so Maybe Magic was not part of any plans. Maybe Magic was a personal time travelling journey and I was never trying to make something that was intended for public listening. But, even with some glaring imperfections to my producer’s ear, it marks 21 days of my life that are very special and, after 9 months of it sitting quietly inside my studio, I decided to release it.

For fans of Michael’s work, I should mention that this album doesn’t sound anything like Michael Hedges’ songs. I’m predominantly a rock artist. That’s my background. My albums are all energy driven as a performer rather than technically driven as a musician. But I do feel it’s important to acknowledge Michael’s enduring influence with this album. Without his tunings, I would not have written these songs.

I am a self-taught musician, so I put my hands up now to all the phenomenal guitarists who have continued to preserve and develop Michael’s playing style. I am in awe of all of you. Maybe Magic is no way a tutorial in his style of playing; I am simply not a contender in that respect. What the album is though, is an exploration into how a contemporary independent singer songwriter might use a guitar differently, in their own way, thanks to Michael’s ground-breaking body of work.

Moreover, it’s the completion of a ritual I began thirty years ago, made with gratitude to the man who opened my ears to a wider universe and changed my life forever. Thank you Michael. 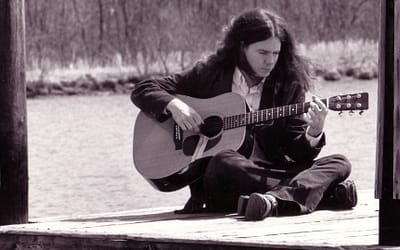