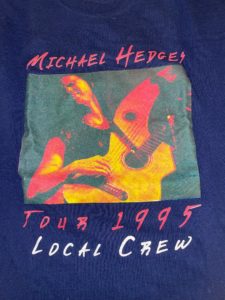 I worked as artist liaison at a venue back in the early/mid 90’s and Michael played twice during my tenure. I would always request working his shows so I could meet and talk to him. I was first ‘introduced’ to him in 1988 via a friend’s copy of the Profile Series on Michael Hedges. Having followed many guitar players from various genres for years, I knew he was a special talent, one of a kind and he became such an inspiration to a budding guitar player (me).

I was always somewhat star struck and nervous talking to him, even though I’d be interacting with him throughout the day at the venue, during sound check, taking him to local record shops or wherever he wanted to go, etc.. I’m sure he sensed it, but he was always incredibly kind.

I remember he had an ‘unusual’ rider for his shows; in the sense that there wasn’t the usual request for a particular alcohol, and no junk food, sweets, M&M’s, etc. He did, however, require vegetarian food and fresh organic produce, for which we would set him up quite nicely, and a local vegan restaurant made him a killer spread for dinner. I also remember he traveled with his juicer. Every time I smell fresh carrot juice now I think of him and the dressing room during his shows. I have another that I’ll post separately. Good memories and so grateful for the experience.