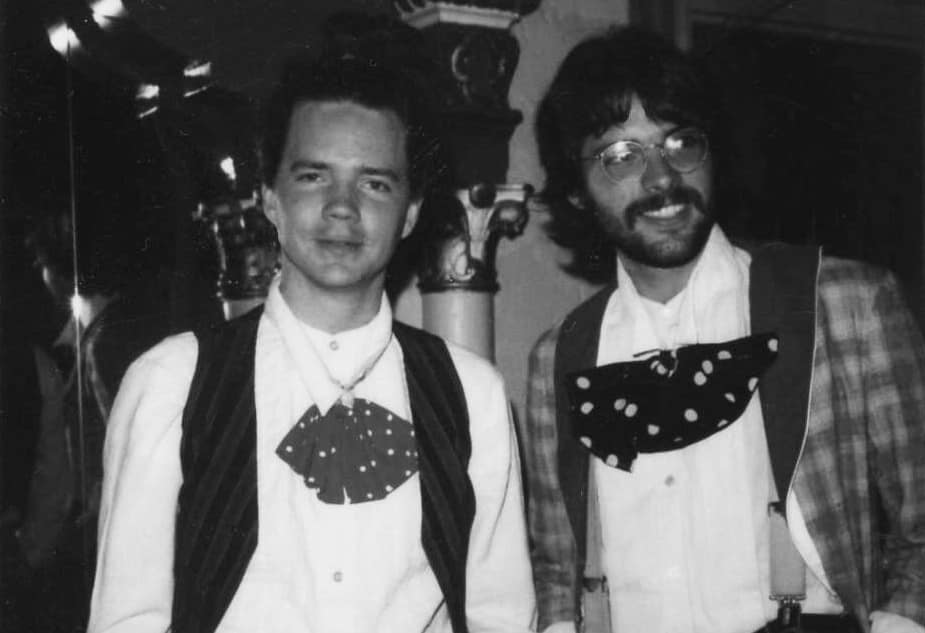 As the nineteen eighties began Michael had moved to Palo Alto, California and was performing at the New Varsity Theater.

I had moved to Vail, Colorado and was performing at the Red Lion and a piano bar in town working apres’ ski afternoons and again in the evenings. At the end of each ski season I would travel out to visit Michael and we would play some gigs together at the New Varsity and travel down to visit his parents who had recently moved from Enid to their Double Rainbow Ranch at the foothills of Yosemite. I had a VW convertible and he had a VW van.

We also found time to return to Enid for a sort of reunion and play a benefit concert to raise money for a local community theater. Michael was offered a contract to record with Windham Hill Records at the time and on tours supporting his album would always stop in to visit me in Vail for a few days. My girlfriend and I were impressed with his breakfast concoction which was basically eggs and every ingredient he could find in our fridge. He called it ‘Mike’s Mess.’

After three years in Colorado and a summer writing and recording in New Mexico I started my own record company. Briar Rose Records released “One More Goodbye, One More Hello’ under the performance name of Donnie Record. I recorded four singles at Woodland Studios in Nashville with some of the finest players in town at the time. I tried to get Michael to play on the recordings but his Windham Hill commitments kept him very busy.

Ironically, we both appeared with charted records, separately but in the same issues of Billboard Magazine in 1983. As Michael began heavy tour dates, I only ran into my pal when he played Nashville’s Vanderbilt University concert hall. I drove to Georgia to see him and hang out when he was touring with Shadowfax and played the Fox Theater in Atlanta. In 1985 I decided to move to California at the encouragement of Michael and settled in Santa Cruz where my brother, Ron and his family lived. I would see Michael much more often, and when he built his studio in Mendocino I would take many trips up the coast to hang out with the Hedges family and  record some original songs together.

Michael would arrange my songs and play many of the instruments while engineering the recording as well. I was amazed to see how far along he had come with his engineering and how comfortable he was in his own studio in the woods.

During recording session breaks we would play with his children and explore the ‘Magic Farm.’

Michael wanted to form a band and when he found the right players he asked me to be apart of the performance to play one of my tunes with the Michael Hedges Band gig at the Keystone in Palo Alto. One week he decided we needed some rest and relaxation and we went down to Big Sur’s Esalen Institute in his BMW to take a 5 day cooking class from wellness guru, Andrew Weil.

At the end of the week Michael and I performed for Andrew and the class with a concert overlooking the ocean. We scheduled a concert together in a church in Palo Alto where Will Ackerman of Windham Hill Records was to be in attendance on the evening of October 7, 1989. At 5:04pm I was on my way out of my apartment in Santa Cruz with guitar in hand when the Loma Prieta Earthquake hit and hit hard. Michael was on his way to the gig on the Juniper Serra Freeway and thinking he had a flat tire pulled over as did every other car on the road. The concert was never rescheduled.

I promoted a concert at Kuumbwa Jazz Center in Santa Cruz in December of 1989 to benefit local victims of the quake. Michael graciously donated his time and talent to the needed relief. The earthquake also ended my steady gig at the Orchid Grill in Watsonville as the ceiling of the restaurant collapsed on my grand piano. What a way to close out the decade but we were poised and ready for the nineties.